Did I have my hands on a Surface tablet? Yes and here's why it wasn't for longer

I'm sorry I pushed Danny Sullivan over the edge; despite having disagreed with him fairly publicly in the past, I'd hate to think there was any ill will between us. I hope didn't actually push past him at the Surface event at any point, when I was reaching across the tables and touching the screens on the Surface units we were being shown, or when I picked up the Touch Cover and Type Cover and tried typing on them, or when I was talking to folks from the Windows team after the formal demos and getting them to show me more things on the Surfaces they were carrying or when I went back to the first table with the various Surface units on them and asked the PR folks if I could pick them up and take pictures of the ports and compare the size to the hefty tablet PC I carry or when one of them offered to take a photo of me trying the Surface on my knee to see if I'm going to be able to use one perched on a chair in a press conference - we don't do much of our work at tables in this job - although that one wasn't turned on (you can see that in the second photo, which is the one that ran with the piece I wrote).

As they say on the Internet, pix or it didn't happen... 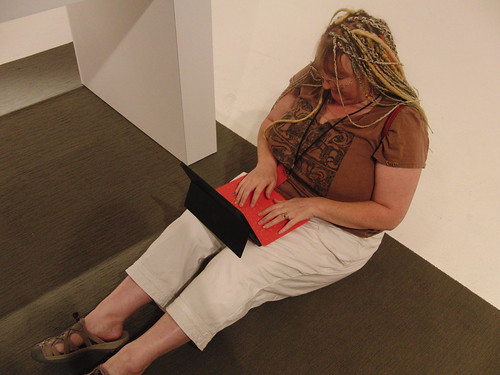 I didn't recognise him in our group or I'd have said hello, but I was concentrating on the Surfaces and the Microsoft spokespeople so I couldn't tell you who else was doing what. I get a little single-minded at press events (and the queuing and the waiting and the sitting and the queuing and the milling around and squeezing in questions as presenters roll through their pre-prepared demos? that's how every press event works; try CES Unveiled for the worst example of this - this year I was hit on the head by the BBC's camera operator twice and in the back of the head by two other video cameras in the two hours of the event; at least this time we got to sit down and there was only one fluffy 8" mike between me and the tablets. And LA traffic? Try driving down the strip from LVCC to the Venetian for meetings in under half an hour - one year Simon proved you can walk it faster. But I tend to think all of this is like the butcher complaining about the lard getting under their fingernails when all you want to do is buy the finished sausage).

Did I get to take a Surface and play with it as much as I wanted to? No, and none of the journalists did. At the Surface sneak peak Microsoft took its caution about Windows RT to the point of caginess; perhaps they hadn't got out of the habits of secrecy they developed in the underground bunker. Or perhaps it's because this event was the first public reveal of the Windows RT 'bet the company' strategy. For all the talk of a plus PC world rather than a post PC one, even Microsoft can't deny the impact of the iPad. Microsoft's response to the iPad is partly Windows RT and partly Windows 8 tablets and both are too important to leave to the OEMs who've been screwing up PCs so badly for the last few years. 83 running processes of crapware and duplicate utilities when you turn on a PC? Please... Windows 8 is a bet the company strategy with classic PCs, tablets, Windows RT tablets, servers and Windows Phone all in the same hand of cards (along with Xbox). No wonder senior Microsoft folk looked reserved and scripted on stage, with Ballmer in an intense rather than an energetic mood. And no wonder Microsoft wants to keep control of every stage of the reveal. But this isn't an Apple-style 'here it is, buy it' approach; Microsoft believes in giving everyone notice. Look at the intense detail on the Building Windows blog. And look at this event as not just sending a message to the OEMs that the quality level needs to go up (I've referred to this as adding another gesture to Windows, one made with a single finger); this is notice to consumers that there will be another tablet on the market and to developers that yes, Microsoft really is serious about WinRT apps. But with a couple of hundred journalists and perhaps 20 or 30 tablets at the event, a free for all, take it and try to break it review session wasn't exactly practical.

That's why what I wrote up as my impressions of the tablet is labelled as a hands-on rather than an in-depth review; those go on for 8-10 pages, not 3. TechRadar has a very transparent policy* about 'hands-on' writeups, which is right there on the same page as my piece; the writer has to actually have had their hands on the device, even for a short time** (press events are crowded (see above) and I'm used to having the new product I'm holding taken out of my hands by other journalists, or having them take photographs of it while it's in my hands; I do draw the line at video journalists who film me while I'm asking questions about a product to use on their site or as background footage in their TV show - my usual retaliation is to start scratching my nose or to gaze directly at the camera, because I am not your B-roll). I've learned to be persistent and to grab my opportunities and after twenty years of covering hardware, I can usually gather my impressions of a new product fairly quickly, especially when I've been covering Windows 8 in depth since it was first mentioned at CES 2011 (I saw a Windows RT demo just last week at TechEd, I've been using a Windows 8 tablet daily since January this year and I've seen the technology behind the keyboard before, at CES 2010) and there's been a lengthy presentation covering the details, so I can concentrate on looking at how the product comes together. That's what I was trying to do in my write-up; give my impression and opinion of what Surface RT is like, given the information I have and the experience I've had of having my hands on the product.

I liked the feel of Surface in my hands; I like the balance of it, the way the 22-degree angles of the edges sit in your hand (the keyboard connector is too sharp unless it has the keyboard in, when it feels like an expensive, slim hardback volume - Folio Society, say). I like the way the keyboard snaps into place and locks securely; Simon got to try snapping it in place and out for longer than I did, but we both had a go. I love the sound of the hinge closing; I'm not sure if Danny was still standing next to me when one of the Surface team handed me a Surface and showed me the groove for popping the hinge open quickly and I'm sure I looked odd holding the Surface up to my ear with my head on one side and snapping it open and shut repeatedly. I spent quite some time stroking the soft-but-strong fabric backing of the keyboard to get a feel for whether it will snag as well as trying the action of the Type version and the key spacing on both at the end of the event when the news writers were tucked away in the corner writing their news stories. Because I do features, reviews and analysis more than news, I can take more time to look and touch and ask questions and gather the materials for drawing conclusions.

Would I write a piece that I called a hands on without touching the device I was covering? No. Am I a bit more persistent about getting my hands on things? Apparently so ;-) Do I tend to have a lot to say about things I'm interested in? That too ;-)


* TechRadar: What is a hands on review?
'Hands on reviews' are a journalist's first impressions of a piece of kit based on spending some time with it. It may be just a few moments, or a few hours. The important thing is we have been able to play with it ourselves and can give you some sense of what it's like to use, even if it's only an embryonic view. For more information, see TechRadar's Reviews Guarantee.

** Want to discuss the minimum bar for reviews, hands-on writeups and other coverage? Let's. I'm old school; unless it's an official statement or has three independent sources, it's a rumour. We're years past being able to say we don't review anything that's in beta, though, and the combination of ad-funded online content and the way people will click through to read the craziest rumours (cough Digitimes cough) is pushing tech journalism to produce more coverage from less hard information. I want to be writing longer analysis, in depth features and considered pieces. Often, I'll have plenty of background that I want to cover along with the hands on experience, that I believe explains why some of the features I talk about work the way they do.

EDIT Apologies to those who have left rational comments & questions; owing to the comments that I don't feel are suitable for publishing, I'm disabling comments on this post. That goes for engaging in discussions by email as well, or on other blogs because I have really nothing to add to all this.

The most common rational question was did I type on the keyboard? Yes, I have pressed keys and produced results on screen. I have not done a full-length live typing test, hence the lack of a detailed discussion of the action of the keyboard. The simulated typing was for the purpose of assessing balance, not because I think you can tell what a keyboard is like to type on when not connected to a running device, and my disclosure that the balance while typing evaluation was on a Surface that wasn't powered up was for complete transparency but mostly to reassure other journalists who thought I might be getting special treatment rather than being, you know, persistent.

How long did I spend with Surface? Didn't time it. We saw units in the audience while we were waiting for our 5.50 slot, then I was in the demo room seeing & touching Surface units, taking photographs and talking to the Surface team for at least 45 minutes (based on the times in the EXIF data of my photographs).

To answer perhaps the most paranoid of the suggestions so far, yes, the Touch Cover is a real, working keyboard, not some fake mockup. (There might have been prototypes in the demo area, but we saw working keyboard connected and working.) Here's a couple of pictures of people (not me, people from Microsoft) using Touch Covers - note the scroll bar that appears at the bottom of the Start screen in the first image because the trackpad is in use and the pressure bars generated by the keys in the second image; you can also see them in action yourself on the Surface launch video around the 28 minute mark. On the video you can see the fingers hitting keys and things happening on screen, just in case you don't believe a still image. 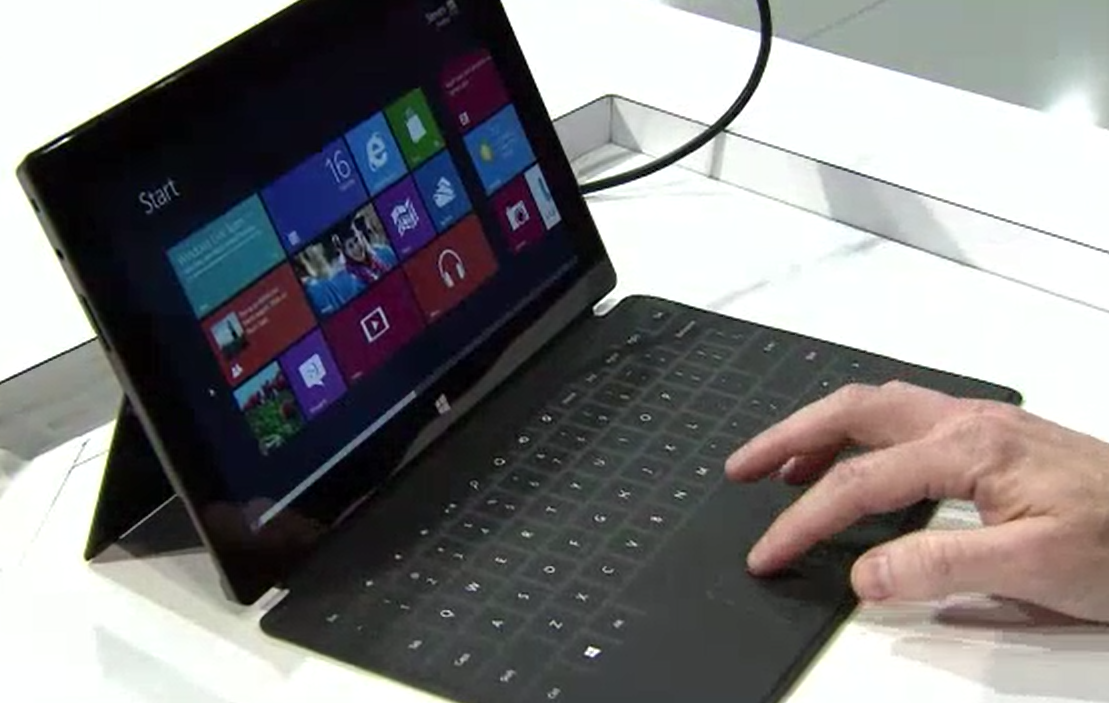 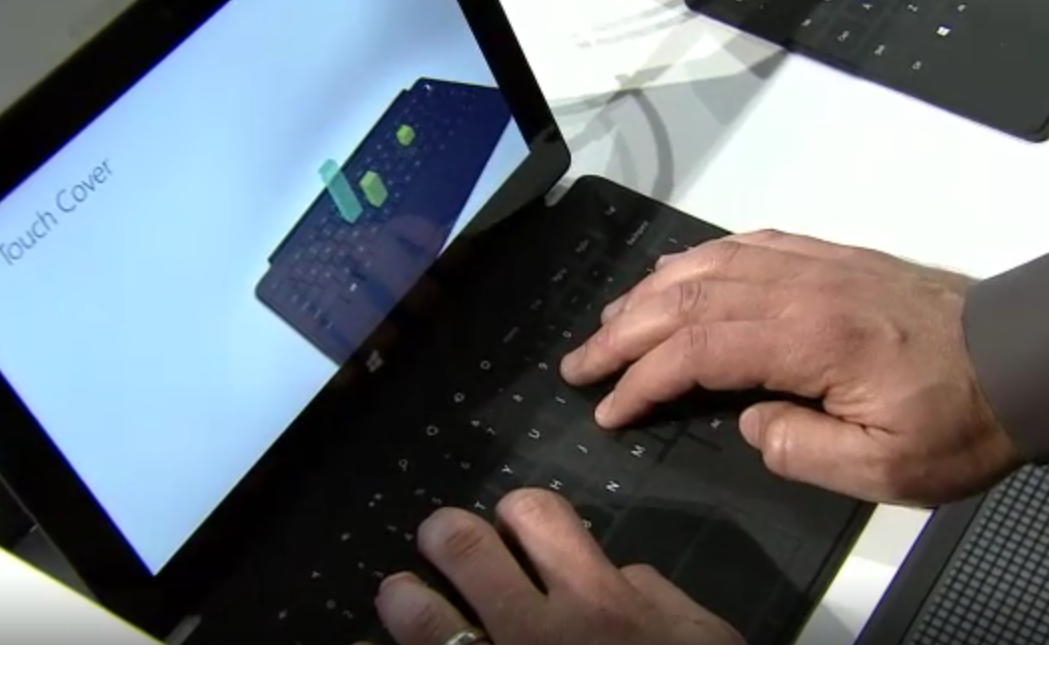