Credit card comedy of errors plus into Arizona, or what's another time zone between friends...

The LA flight is long but pleasant (at the front of the plane, after a nice lunch and massage in the Clubhouse) but it is odd when you take off later afternoon into the murky light and it's dark by the time you reach Scotland and still dark by the time you look out over America and still dark when you land in LA and drive to Santa Monica. Beautifully warm and sunny the next morning, which we spent over brunch in the tunnel of bougainvillea that is Cora's Coffee Shoppe - home of the omelette ask-your-waiter and the tomato jam of surpassing delight. Popped into the Microsoft Store in Century City to get a Samsung Series 7 slate - the thin tablet PC I've been waiting for since 2003 - well, it would need a clip-on keyboard to be perfect and they only had a Bluetooth keyboard for it. I'm going to try to add something to the case with duct tape and cardboard for the times when I need to have the keyboard on my lap, not on a desk. This is the non custom version of the Windows 8 preview tablet we didn't get to keep and it's a good job I really wanted one, given how hard it was to buy.

First none of them were available in October before we came home (missed it by four days). Then the 25% discount the Microsoft Store was offering expired on the 2nd and we didn't land on the 2nd in time to get to the store. And then my credit card wouldn't go through at the store. Ah, I thought; I'm in the US and it's not a cheap purchase - I'll call up and tell them it's me. You're in the US, said MBNA with a note of shock; you didn't tell us! As you can see from my bills, I said, I travel here a lot; I'm not phoning you every month to tell you where I am... Now, about this purchase. The store had to phone their merchant services, he said; they'll get you to do security. The nice chap who'd already been helpful enough to show me all the keyboards and advise me to get the protective case and apply the gift card I earned buying the slate to the keyboard and case phoned them, but they hung up on him. We tried the card again; no. He phoned them back; they weren't helpful. I phoned MBNA, who said they'd approve the transaction. We tried the card again; no. By this time the nice chap had to go to lunch and handed me over to his colleague. By this time we'd demonstrated the Nokia Lumia 800s we're carrying to most of the store workers, including the senior team who kept coming back to check on progress. We tried the card again. Colleague suggested she speak to MBNA; we phoned them, they told her what to say to the people she had to phone, who said they couldn't get through to MBNA, so I told them I'd already talked to MBNA and gave them the number I'd called, they called MBNA and got the security team who spoke to me and asked me even more security questions and said the purchase was really, really approved. We tried the card again. Guess what? I phoned MBNA yet again, they said an approval could take up to an hour. I've been here an hour, I said through gritted teeth. Try in half an hour, they said chirpily. I asked the nice lady at the Microsoft Store if the tea place around the corner was any good because I was going to need a drink soon and she brought us out some green tea and we timed the half hour and tried the card again. Guess what? She phoned merchant services, who blamed Amex and MBNA and she demanded to speak to a supervisor and was put on hold. Original nice chap came back from lunch as I phoned MBNA again and became increasingly and frigidly Polite and suddenly the MBNA person spoke to her boss and said the approval would only take ten minutes more... We waited fifteen minutes - still on hold for someone's boss on the other line - and tried the card again. There was silence for a moment and then 'Listen!' said the original nice chap. 'That's the receipt printing!'

I think it's the only time I've ever high-fived a sales assistant for taking my money.

It was all a little surreal, because we passed the time chatting to the Microsoft Store folk about Windows Phone (including my belief that the Lumia 900 pix are fake; they claim not to have heard anything and to have had lots of advance info about the the 800 and 710), Zune vs Nokia Music vs Pandora vs Spotify, Media Center vs DLNA video on Xbox, whether all-in-one PCs get hot, CES, slates, accents, tea, Dexter and other good TV shows... it was like hanging out with any geeks of our acquaintance, except for every so often I tried to spend money and they tried to take it from me and it didn't work and we all picked up the phone and carried on chatting. They tried everything possible to make the card work (taking a dollar off the price every time we ran the card so multiple transactions for the same amount didn't trigger a fraud alert), they never suggested giving up and it was the nicest time I've ever spent two hours trying to buy exactly what I knew I wanted before I walked in the door... 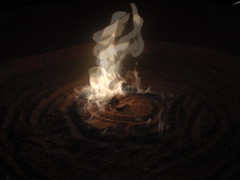 After that we chugged through minor traffic jams out to Palm Springs and the desert night and a moon too bright to see meteors and the giant hot tub and a rather nice burger bar with a deck and a fire and sweet potato and parmesan truffle fries (not all together) and an early jet lag night and an early morning swim and our traditional corn beef hash at Sherman's Deli. This is a mildly caricatured Jewish deli that serves 6-egg double thick bacon omelettes and has notes on the menu like 'gefilte fish; you'll like it' but the corned beef is about the best I've ever tasted. It took me four visits to work out the convoluted menu choice to get exactly what I want; sliced tomato rather than the thick potato scallop fries, everything bagel not toast, with butter not cream cheese, with one latke on the side (with sour cream and apple sauce). Tangy meat, crispy potato, a vegetable presence, chewy bagel. yum. 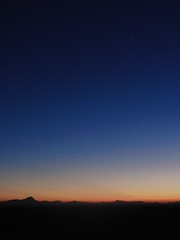 Then we took the interstate past the foothills that lead into Joshua Tree - with an unusually bright and very science fictional moon hanging overhead - and past all the cactuses and odd volcano cones and into Arizona where it's an hour later for no readily apparent reason. The sunset was orange and just got more orange as it went on, long after I was convinced it was going to just fade into darkness, although darkness had descended to hide the sprawl of Phoenix from our eyes.

We're staying at the motel next to the Scottsdale Microsoft Store again, on the grounds that we knew where it was. We walked a couple of blocks through the warm evening towards the pretty light-festooned trees of downtown and found a sushi bar for dinner and explored the new Soleri Bridge - either designed by or in honour of Paolo Soleri, the architect building arcologies in the Flagstaff desert that he finds my casting absurd bronze bells. Some of these decorate the bridge, hanging in front of two open-fronted, red-lined metal cylinders that echo the two cylindrical metal supports for the suspension lines that hold the cantilever; a red girder runs down the middle of the bridge like the red lining of the bell gate projecting out through the spacing between the supports - an interesting mix of the decoration emphasising the function. The lights over the Salt River looked like a scene from Tron Legacy, doubled in the water and distant in a dark space with no visible human. Then half a dozen skateboarders whizzed across the bridge to feel it resonate beneath their wheels and we found a sculpture of four enormous wooden Spanish style doors lined with mirrors. I want to see that in the daylight, but I fear walking inside it in sunlight will feel like I'm at the mercy of a Bond villain...