I bring you fire, in high speed video

Maker Faire this year is the usual collection of fun, geeky, inspiring, thought-provoking, crafty and just plain weird. Towards the end of the day we were feeling a little on the cold side so it was time for fire: the amazing fire sculptures. The Flaming Lotus Girls (and guys) had several flaming flowers, one with Tesla coil flowers, two with remote controls for extra flame. Enthusiastic pressing by passersby meant we got some great photos; I took most of these using the in-camera HDR mode on my Exilim which superimposes about five exposures, and that gets the ghost of many flames together. 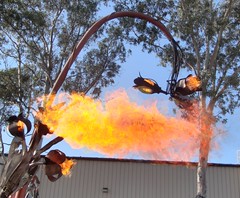 And then Simon suggested I try the high-speed video; the 240fps version came out better because the resolution on the 1,000fps video was exceptionally low (and the Flickr encode loses detail). I might go back and try again, but watching the flames unfold is still pretty cool. Bet the Flash doesn't embed in LJ of course... nope, so the link is http://www.flickr.com/photos/marypcb/5745768466/