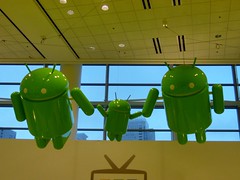 Google IO 11 android family
Originally uploaded by marypcb.
Look carefully; it's harder to see in the photo but the specular higlights on the Android on the right are rounder and more regular because the surface is smoother and shinier - the Android on the left has a slightly rougher texture. It might be just the angle but from this angle, the smile on the face of the Android on the right is bigger, broader and somehow smilier. The antenna are at a slightly different angle. It's all very subtle and the only reason I ever took note of the differences is that walking past and glancing at the Android family out of the corner of my eye I found myself perceiving the Android on the right as representationally female and the other oppositionally male, when in the past they've been ungendered to me. 'Oh look', I said to @sbisson 'heteronormative Androids' and I then had to work out what it was about them that my lizard brain had seen as gender characteristics.