The same Web page will load at different speeds on the same phone on the same network five minutes apart, so hard figures aren't always meaningful and I saw the expected variance in my Windows Phone 7 tests, but I've seen a couple of questions about it so here's my averaged results, testing on Orange with Android 2.2 on a Nexus One and WP7 on a Samsung Omnia and O2 with an iPhone 4, with and without wi-fi turned on. In these particualr tests at this particualr time, Android and Windows Phone 7 were both faster than the iPhone for the Flickr page, and Mobile IE was consistently a couple of seconds faster than Android; Microsoft says they've put a lot of work into optimising image downloads and it shows. More repeatably, the main thing I saw was that most of the time Windows Phone 7 loaded pages pretty much as fast as the other phones, a couple of times it sat for a while, not doing much - and that could be more about the network stack or the OS transport than the browser itself. I need to do more testing to be sure. 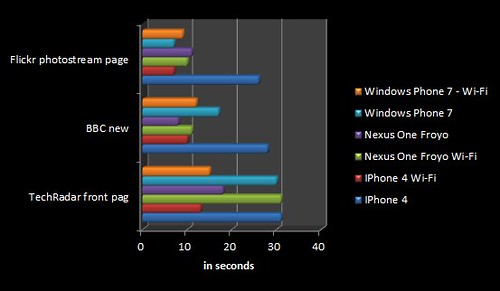 You can read my in-depth, at-length review over at TechRadar; I have caveats but I'm impressed with what I've seen so far. There are drawbacks (every mobile OS has flaws today) and I need to see how it handles as a main phone over time when I have a handset for long enough to do that, but I'm impressed with what Microsoft delivered in the time they had. Now they have to keep up the pace.
Collapse